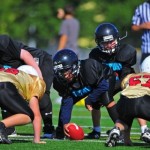 n an age of video games and the internet, children are much less inclined to play outside and participate in sports. Lately this is due in great part to fear of getting hurt, particularly over the latest controversy concerning concussions in football. But football of today is nowhere near your father’s or your grandfather’s sport.

True, there is some inherent risk in little league Pop-Warner football and right up to the big league. But most of what parents fear is no longer part of the sport. And what you see on television in the NFL is far from the level of contact little league, high school and even college football players encounter. Not to mention ever since the prolific Bill Walsh of the 49ers started winning Super Bowls in the 1980’s even NFL coaches started steering away from hard-hitting, bone-crushing, disabling methods of defensive tactics.

As other coaches in the NFL soon followed suit to the light-on-the-feet, go-for-the-ball game calling, in great part because Walsh won 3 Super Bowls, the entire sport took on a different culture. This acted as a catalyst on the trickledown effect to college, high school and little leagues. With this, young players are more frequently taught how to lead with their shoulder- rather than the crown of their helmet- to better protect themselves and their opponents.

Not only are players employing safer tactics, coaches take on much more liability. That is, coaches encouraging players to play violently even if it means drawing a 15 yard penalty are aware of the consequences to their careers. Football will always be a very physical game, and accidents happen. But going out and hurting or getting hurt simply is not anyone’s objective in a game, especially these days. And just as your son or daughter could get hurt playing football, they can get hurt playing soccer, basketball, baseball and hockey just the same.

Inactivity amongst American youth is having detrimental consequences, including higher rates of childhood obesity along with diminishing concentration and thinking skills. The apparent increase in childhood obesity brings diminished concentration skills which physical activity promote are also a direct consequence. Team sports, such as little league football, not only promote healthy activity, concentration and hand eye coordination, they encourage teamwork and comradery.

With over 30% of American children under the age of 19 years old currently obese and nearly 70% of adults battling obesity, the obesity rate is projected to continue. This is because childhood obesity rates have been growing 1% a year since the early 1980’s, according to CBS News. Encouraging your children to go out and play team sports- yes even football- is great for building character and leading a healthy lifestyle.

NOW ENROLLING!
Schedule a Tour or Submit an Inquiry Now!